Columbia Sportswear is unveiling new merch inspired by the ultimate battle between the light side and the dark side of the Force. 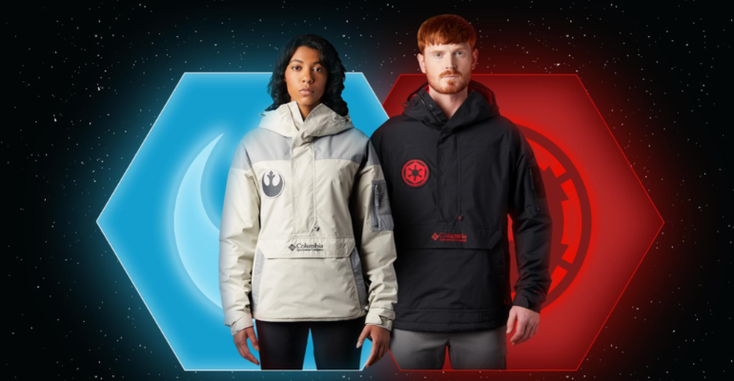 Columbia Sportswear and Disney have once again partnered for a new line of jackets, this time inspired by the “Star Wars” franchise.

The deal follows a previous collaboration earlier this year, in which Disney and Columbia joined forces for the release of “Frozen 2” merchandise.

The “Star Wars” collection features two reversible jackets. The allegiance jackets feature two opposing color schemes, one for the light side and one for the dark side of the force.

The light side jacket features a light gray color scheme with a symbol for the rebel alliance, while the dark side jacket boasts a black and red color scheme with an imperial patch on the front. The jackets are inscribed with "May the Force be with you" and "You underestimate the power of the Dark Side,” respectively.

Both jackets will sell for $200 each and go on sale at 12:01 a.m. ET on Dec. 6. Earlier collabs between “Star Wars “and Columbia included $400 parkas, styled to resemble the parkas worn by Han Solo and Luke Skywalker.

Fans interested in taking this experience to the next level can purchase one of 25 jackets signed by Mark Hamill, who portrays Luke Skywalker, available for $900 with all proceeds going to college access programs and scholarships selected by Hamill. The signed jackets will be sold only at Columbia-branded retail locations in New York City; Buena Vista, Florida; downtown Portland flagship; Oregon; Minneapolis, Minn.; and Seattle, Wash.