The Australian retailer has released a new apparel range inspired by Blinky Bill. 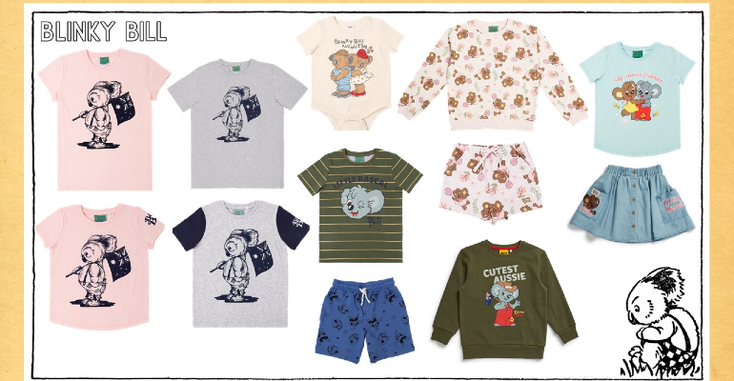 Now available in-store and online, the branded range includes sleepwear for both infants and kids as well as a selection of outerwear pieces for boys and girls including t-shirts, shorts and skirts.

“Blinky Bill has been a much-treasured part of Flying Bark Productions’ history since 1992 when the iconic Blinky Bill feature film, ‘Blinky Bill: The Mischievous Koala’ was produced by Yoram and Sandra Gross,” says Barbara Stephen, chief executive officer, Flying Bark Productions. “The world’s favorite koala has gone from strength to strength since then with the 2015 feature film, ‘Blinky Bill the Movie’ and the 2016 television series, ‘The Wild Adventures of Blinky Bill’ being produced by Flying Bark Productions.  It goes without saying that we are absolutely thrilled to see Blinky Bill in the spotlight again with this first ever Big W range for infants, kids, mums and dads.  Blinky Bill continues to be as popular as ever with parents and kids alike so we are certain the matching pieces for mum, dad and kids will be mini-me must-haves.  Not only is the range incredibly cute but it is has been created in partnership with Cotton Australia - meaning each piece has been made from Australian cotton and goes to supporting Australian cotton farmers.”

first ever range for Big W also includes a Blinky Bill t-shirt for mum and one for dad that both match pieces in the kids’ outerwear range – perfect for those matching mini-me moments.

“As one of Australia’s most-loved local brands, Blinky Bill continues to be popular with the young and old, mums and dads and of course, kids,” says Kerryn McCormack, general manager, Merchantwise Licensing. “This partnership with Cotton Australia is absolutely perfect for the Blinky Bill brand – Blinky Bill is synonymous with the Australian bush and the use of Australian cotton in these products goes to ensuring the support of Australian farmers in regional areas across the country.  We are sure it is going to be an incredible retail success.”